Got a legal question? Tune into LAW TALK on the Talk of Acadiana, LAW TALK is the ask-a-lawyer radio show where you can call in to talk to local lawyers in the Acadiana area. Jonathan “Law Dawg” Fontenot and Mark “The Director” Judson from the SWLA Law Center will be standing by to take your call. LAW TALK Saturday afternoons at 2.

About Mark Judson:
Mark “the Director” Judson is originally from West Point, Mississippi. He graduated from Ole Miss in 1987 with a B.A. degree in journalism and later obtained his juris doctorate from the University Of Mississippi School Of Law.

Mark moved to Lake Charles in 1991, where he has enjoyed a civil law practice. His resume’ includes: (1) clerking for the late Henry Yelverton at the Third Circuit of Appeal; (2) working with then attorney and now retired Judge David Painter as an associate attorney in Painter Law Firm; (3) having his own solo Law Practice, and (4) having an exclusive real estate practice with United Title of Louisiana, Inc.

In 2010, Mark became the Executive Director of the Southwest Louisiana Law Center, a non-profit “low bono” law firm whose mission is to provide first rate legal services to the economically disadvantaged of Southwest Louisiana. The SWLA Law Center helps hundreds of peoples every year with civil legal needs. The Law Center charges their clients on a sliding scale. As Mark puts it, “we help people who are too rich for free legal aid but who cannot come close to hiring a private attorney.”

Mark is a member of the Louisiana Bar, the SWLA Bar, the Mississippi Bar, the Albert Tate American Inns of Court, the SWLA Round Table of Title Examiners, and the Association of Fundraising Professionals.

He is married to Sara McLeod Judson of Lake Charles. They have one daughter, Rachel.

He is a member of First Presbyterian Church, Lake Charles, where he has served as Elder, Sunday School Teacher, Clerk of Session, Stewardship Chair, and monthly Men’s Breakfast Coordinator.

On Friday nights in the fall, he is the football, radio, play-by-play announcer for the Barbe High School Buccaneers. 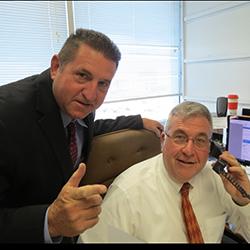